Maddow: Obama ‘Is Offering Up A Significant Slice Of The Democratic Soul’ With Social Security, Medicare Cuts 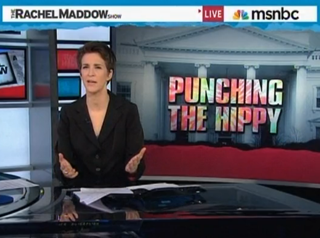 Among the most shocking concessions to many Democrats that President Obama proposed during this week’s budget talks was the idea that cuts to Social Security and Medicare are “on the table.” The idea, given that Republicans have obstinately refused to negotiate on many points of the budget talks, struck Rachel Maddow on the program tonight as useless, only servicing to “aggrevate and alienate” the Democratic base.

Maddow explained how President Obama’s proposed concession, while stunning to her, was “a central part of how Democrats operate”– which Republicans “kowtow” to their base, Democrats “aggravate” it. Social Security and Medicare, Maddow argued, were never Republican darlings: “the Republicans fought them from the beginning, and Republicans have long tried to get rid of those programs.” The antagonism, as well as their foundation, have made “nothing more fundamental to Democratic politics than Social Security and Medicare,” she argued, “two of America’s most popular and successful programs.”

By putting the two programs on the table, Maddow concluded, “President Obama is offering up a significant slice of the Democratic soul and he still can’t get a deal from Republicans… they appear to be getting nothing in return.” What’s more, she continued, “Social Security does not contribute to the deficit,” so cutting it would only serve to benefit Republicans without having much to do with the topic at hand. Maddow did leave room for the political move to have been a “test” of Republicans, but taking it at face value, there was one word Maddow attributed to it repeatedly, in all its senses: “No.”