Maddow On Christie’s Speech: ‘One Of The Most Remarkable Acts Of Political Selfishness I’ve Ever Seen’ 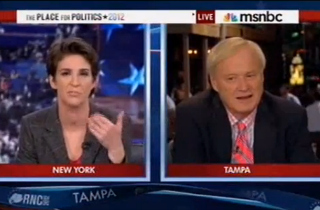 Reacting last night to New Jersey Gov. Chris Christie‘s keynote address to the Republican National Convention, MSNBC host Rachel Maddow expressed “surprise” at his speech, adding that she found it to be “one of the most remarkable acts of political selfishness” she has ever seen.

“I am a fan of Chris Christie as an orator,” she prefaced her take on his speech, “I enjoy hearing him speak. I think he is a guy that who brings a looseness to his political conversation that even when you disagree with him, it makes you want to pay attention.”

However, she went on to say that she disliked this particular address: “This speech not only I think was a bad speech, I think that this was one of the most remarkable acts of political selfishness I have ever seen on a stage this big.”

“This was a 2,600-word speech in which he used nearly 1,800 of those words before he first said the name ‘Mitt Romney,'” she explained. “And as soon as he said Mitt Romney, he went back to talking about himself for hundreds more words.”

She then suggested that Christie’s speech was essentially a stump speech for a potential 2016 presidential run: “This was Chris Christie accepting the nomination of the Republican Party for 2016 because Mitt Romney wasn’t even interesting enough to talk about in the keynote address that is supposed to be for Mitt Romney’s nomination,” she said.

“I find this speech to have been totally shocking, completely opposite to what I expected,” she concluded.