Maddow On The ‘War On Moms’: “A Huge Big Political Fight In Which Both Sides Agree’
video

Maddow On The ‘War On Moms’: “A Huge Big Political Fight In Which Both Sides Agree’ 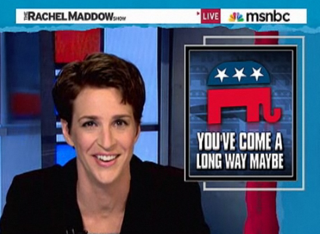 Rachel Maddow thinks there is a political struggle against women, but Ann Romney‘s employment status has little to do with it. On her program last night, Maddow explained that the debate over who loves their moms more seemed to her something of a smokescreen to the actual problems with Republican policies on women, and not just on abortion– Republican Congressmen calling the Lily Ledbetter Equal Pay Act a “nuisance” can’t be helping much, either.

Maddow began with noting the surprise Ann Romney appearance at the NRA, with which her husband, Maddow argued, believed “was scoring political points by not only introducing his wife unexpectedly, but saying he respects working women in the home.” Maddow noted that he was not the only one praising mothers on that day– “Barack Obama, the Democratic presidential candidate, was telling an interviewer exactly the same thing.” The disagreement over how much either side loves their mothers, to Maddow, was a nonexistent one, “a huge big political fight in which both sides agree and use almost the exact same language to express their very similar feelings.”

She then turned to actual policies and bills in Congress, to make the point that “Republicans are not being accused of waging a war on women for no reason.” For one, Arizona recently passed a bill making abortions illegal in a time period earlier than any other state. Then there is the Lily Ledbetter equal pay law, which would create a cause of action for women being paid less for the same work as a man. “It is a law that says women must be allowed access to the courts if they are being paid less than a man for doing the same work. That is a nuisance,” Maddow argued, quoting Pete Hoekstra verbatim.

As for Romney’s take on that law, a question on a conference call says it all– from Huffington Post‘s Sam Stein, asking Romney’s position on the matter. “We’ll get back to you on that,” answers a spokesman.