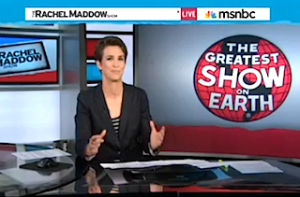 At the end of a day that saw the Republican National Committee voting to boycott any GOP primary debates on CNN and NBC over planned film projects about Hillary Clinton, Rachel Maddow examined just how Republicans pick their presidential nominees in the post-Bush/Cheney era–and why things have gone so horribly wrong for them.

After Mitt Romney got “clobbered” in 2012, Maddow said, “there were recriminations and some long, hard looks in the mirror.” She quoted from RNC chairman Reince Priebus’ so-called “autopsy” report, that stated, “if our party is not welcoming and inclusive, voters will continue to tune us out… The Republican Party needs to stop talking to itself.”

With CNN and NBC out of the picture for 2016, Maddow said, “now the plan is to have the Republican presidential candidates debate in the next cycle moderated by Rush Limbaugh. Or maybe Sean Hannity. Or somebody else from talk radio.”

Maddow posited that the RNC boycott “doesn’t have anything to do with Hillary Clinton.” Summing up the RNC’s plan, she said, “you’ve got to get rid of mainstream news organizations having anything to do with Republican candidates, because, instead, it’s going to be right-wing talk radio now. They’ll do the vetting and that is how America will learn what the Republican Party has to offer.”

The left, Maddow said is “really psyched about this prospect, for obvious reasons. But the Republican Party must see some benefit to this for themselves, or they wouldn’t be doing it, right?”