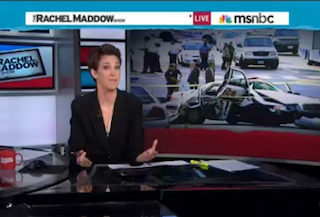 Rachel Maddow hailed a rare moment of unity in Congress today during her Thursday night broadcast. When Democratic Rep. Steny Hoyer took to the floor of the House today to thank the Capitol police who responded to the car chase that ended with a suspect being fatally shot, Maddow reported that there was a “unanimous, bipartisan, standing ovation, a big round of applause.” Finally, there was something that Congress could agree on.

But at the same time, the MSNBC host warned that if Congress doesn’t find a way to actually work together to end the ongoing government shutdown, things may not go so smoothly in the future.

After describing the terrifying scene on Capitol Hill, especially when all the public knew that there had been “shots fired” and the Capitol was on “lock down,” Maddow said the city was fortunate that “the uniformed Secret Service personnel and Capitol police officers who were involved in this scary but short incident this afternoon, they have been declared essential enough as federal employees that they were still on the job today and able to respond to this very scary incident.”

“But if the shutdown goes on much longer, these guys are going to start skipping paychecks,” she continued. “The Capitol police and uniformed Secret Service officers who protect the Capitol, including in incidents like today, they have been told by their supervisors to start making alternate plans for paying their bills. Because they don’t know and nobody can tell them if they’re going to get their next paycheck. It all depends on whether or not this shutdown continues to drag on.”