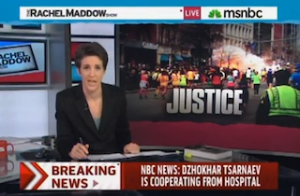 Rachel Maddow broke news at the top of her show Monday evening about a federal hearing that took place earlier in the day inside the Boston Marathon bombing suspect Dzhokhar Tsarnaev‘s hospital room, where he is currently recovering from serious injuries after being apprehended by police Friday night. While he has been reportedly unable to speak, by writing and nodding his head the suspect told officials that “he and his brother were not in touch with any overseas terrorists or groups, and that they conceived the bombing attack on their own, motivated by religious fervor.”

The court hearing was held at Beth Israel Deaconess Medical Center today, Maddow reported, with the federal magistrate judge, defense attorney and prosecutor in attendance. Maddow read aloud from the transcript of the hearing, during which the judge informed the suspect that he is being charged with “one use of a weapon of mass destruction and malicious destruction of property resulting in death.” The prosecutor informed him that the possible penalties include “death or imprisonment for life or imprisonment for any term of years.”

The judge also read Tsarnaev his Miranda rights, beginning with, “you have the right under the Constitution of the United States to remain silent.” And the transcript notes that the defendant “nodded affirmatively” to he understands these rights. At one point, the defendant answers the question about being to afford a lawyer by saying “no.” Maddow pointed out that “this is the first time we know that he can speak.”

Before the judge adjourned the hearing, she set the next hearing date for May 30th, five and half weeks from now. By then, the suspect will presumably be well enough to appear outside of the hospital in a more formal court room.

Maddow marveled at the proceedings, remarking “that’s the way we do it in this country. Even if justice has to travel to you in your hospital bed… the judge will come to you and the prosecutor, and you will get read your rights and be assigned a defense attorney if you cannot afford one, and you will be tried in court, in civilian court. You are nothing special.”

Read the full hearing transcript below: