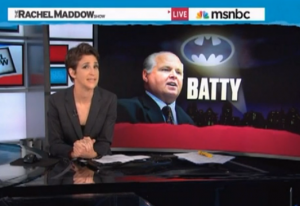 Rush Limbaugh today made the inevitable Bain Capital-Bane from Batman connection, in the form of a conspiracy theory. Over at MSNBC, Rachel Maddow took note, railing against both the radio host and the “modern American Right” for their damaging addiction to conspiracy theories.

From the remarks Limbaugh made:

With no effort to restrain her mockery, Maddow contended that, sure, the villains in Batman were “pre-named decades in advance in anticipation of a 2012 presidential election in which one of the candidates would have a contested affiliation with a company named Bain.” The conspiracy is “deep” and has “a lot foresight,” she ridiculed, adding that, in that case, Gone With the Wind was an “early salvo of the clean energy movement.”

And with that, Maddow was off! “The modern American Right is hermetically sealed in a media universe that lets in no natural light and no air,” she said. “They breathe in only their own exhalations.” And in that bubble, she asserted, they especially have an affinity for conspiracy theories. While mostly hilarious, it does occasionally have real-world consequences, like when Republican blocked ratification of the Law of the Sea Treaty, which has had bipartisan support. Why did they block it? “Black helicopters or whatever,” she explained.