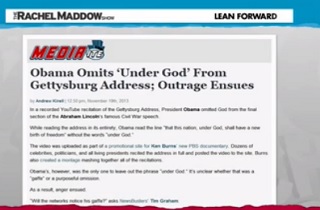 As Mediaite‘s Andrew Kirell reported yesterday, the conservative media spun up its outrage warp drive over President Obama‘s supposed omission of the words “under God” from his recitation of the Gettysburg Address, only to later learn that the President had been asked to read a first draft of the speech that did not contain the phrase. It was with some delight, then, that I noted Mediaite fave Rachel Maddow cited our reporting on Tuesday night’s episode of The Rachel Maddow Show.

Rachel began the segment in trademark fashion, building a foundation of context for the story by ticking off several other deranged right-wing outrages from earlier in Barack Obama’s presidency. Then, she went around the horn describing how various right-wing media outlets fairly convulsed with outrage over the President’s “omission” of the phrase “under God,” and Mediaite‘s writeup appeared onscreen. What a proud moment…(record-scratch noise).

“The conservative media criticism website Mediaite covered it under the guise of covering the outrage about it,” Maddow said.

Wait, what? This site has always featured writers with a diverse set of viewpoints, and while you can argue over where the balance tilts at any given time, we have always been defined by that diversity of views. When we’re not a “conservative media criticism website,” we’re “primarily left-wing,” to hear Bill O’Reilly tell it.

The accusation that Mediaite covered the Gettysburg kerfuffle under the “guise” of covering the outrage about it would be fair if we had suddenly, just for Barack Obama’s recitation of the speech, created a whole new category of reporting on outrage just for the occasion. It’s actually kind of our wheelhouse. It’s only fair to note that, in covering the outrage, Kirell noted the following:

TheBlaze has reported extensively in the past on the controversy surrounding whether Lincoln actually said the words “under God” in his original speech.

Lincoln’s original draft did not include the words “under God” and so, perhaps, Obama was reading from that iteration? We’ll likely soon find out.

If anything, the websites that ran with this story probably should have waited to find out, but they didn’t. What we did do was provide that bit of context, and update our story immediately, crediting Media Matters for pointing out that the President was reading from the earliest draft of the Gettysburg Address, which did not include the words “under God,” and that he was asked to do so by documentarian Ken Burns.