Maddow Slams Hypocrisy In Attacking Obama For Politicizing Bin Laden: ‘If You Are A Republican, It’s Okay’ 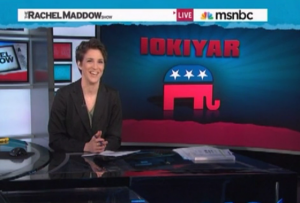 Rachel Maddow introduced a segment with an acronym on Tuesday: IOKIYAR. Meaning: It’s OK If You Are a Republican. Using this premise, Maddow highlighted what she perceived to be hypocrisy from the critics who accused President Obama of politicizing the anniversary of Osama bin Laden‘s death by campaigning on the accomplishment (saying Mitt Romney wouldn’t have made the same call).

“It’s okay to say something like that if you are a Republican,” she said. “That was the same election, 2004, in which Dick Cheney declared a vote for the Democratic candidate would be a vote for the United States to be attacked by Al Qaeda again.”

Maddow asked, “Is that politicizing national security, or is that okay if you’re a Republican?” She then mentioned McCain’s 2008 9/11 tribute video. In that election year, she said, McCain campaigned on having a secret plan to kill bin Laden. Then, “in real life,” Obama did kill him, but McCain “said it’s unseemly to campaign on something like that.”

Republicans are outraged because it’s an election year, she said. She recalled the celebrations in the middle of the night, after the killing of bin Laden was announced. This is a day we will mark now, Maddow said. She then noted Romney appearing with Rudy Giuliani at an event with New York City firefighters, “surrounded by cameras,” to commemorate the anniversary.

“See, President Obama doing that is very disappointing,” Maddow said. “But if you are a Republican, it’s okay.”