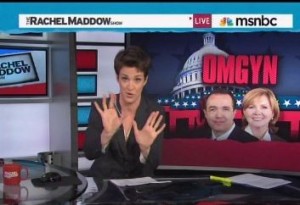 Maddow first highlighted a conservative radio host who, for some bizarre reason, has this theory that locusts just follow President Obama around everywhere like he is the harbinger of plagues or something.

Maddow said the GOP attempted to try and put out a more articulate voice by letting Marsha Blackburn push for the abortion bill. However, on MSNBC, Blackburn said that when women report rapes, it gives police people to track down and bring to justice. Maddow described this as “House Republicans effectively forcing you to use your uterus and access to it as a means of helping the police with their investigations.”

Maddow remarked that the GOP’s latest attempt to ban abortion is farther than they’ve ever gone before, even as House Speaker John Boehner insists that jobs are their number one concern.