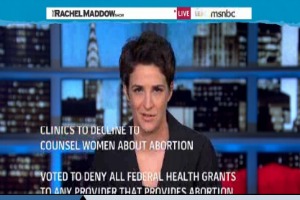 On The Rachel Maddow Show Monday night, host Rachel Maddow tore into Senator John McCain for his recent comments about how the GOP should leave abortion issue “alone.”

McCain appeared on Fox News Sunday, and told host Chris Wallace: “As far as young women are concerned, absolutely, I don’t think anybody like me — I can state my position on abortion but, other than that, leave the issue alone, when we are in the kind of economic situation and, frankly, national security situation that we’re in.”

Maddow took the opportunity to slam McCain for not only his legislative actions in direct contravention of his statements, but also for continually appearing on “the Sunday shows” with what she views as meaningless commentary. Maddow then ran a list on screen of all of McCain’s anti-choice actions, including voting to defund Planned Parenthood and voting to roll back access to contraception.  She said that no one should be taking McCain seriously anymore, because despite his statements, he has continually voted “not to leave abortion alone at all, but to intervene to roll back abortion rights or take them away from American women entirely, as a matter of policy. That’s how he has left that issue alone.”

Maddow noted that McCain also said “Sunday in that same breath that the Republican party needs to work on comprehensive immigration reform.” She then played a clip from a 2008 debate for the Republican presidential primary, where the moderator asks of McCain,

“Your original immigration proposal back in 2006 was much broader and included a pathway to citizenship for illegal immigrants who are already here. What I’m wondering is, you seem to be downplaying that part, at this point if your original proposal came to a vote on the Senate floor, would you vote for it?”

To which McCain of course replied, “No, I would not.”

Maddow continued to eviscerate McCain and finally wondered, “What would happen if the Sunday shows stopped booking John McCain every week? What he says there does not even reflect the reality of his own life in politics let alone anybody else’s life in politics!”

She wraps up the segment by asking, “When does it start being embarrassing to put that particular Senator on TV every week as if he is someone who’s words mean something?”

Watch the full clip, below, via MSNBC: