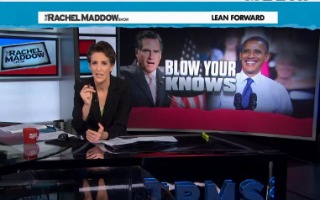 On Friday, MSNBC’s Rachel Maddow compared some conservatives’ discomfort with and dismissal of recent polling date to Iran’s new, government-approved “Iranternet.” In both cases, she explained to viewers, there is a “controlling dictatorial impulse” at play when a group — be it certain partisan conservatives or the repressive Iranian government — seeks to ignore, discredit, reject, or actively hide information that does not fit its agenda.

In the case of these conservatives, said Maddow, there is an ongoing and concerted effort to create an alternate reality, of sports, whenever information presented through mainstream outlets makes the group uncomfortable. This can take form in, say, the creation of a “fantasy electorate” from which to extract preferable polling results, or the establishment of a far-right conservative response to Wikipedia should the information presented on the online, community-edited encyclopedia make certain people “uncomfortable.” For example, viddy this entry on dinosaurs, via Conservapedia, “The Trustworthy Encyclopedia:”

Creation science asserts that the biblical account, that dinosaurs were created on day 6 of creation[3] approximately 6,000 years ago, along with other land animals, and therefore co-existed with humans, thus debunking the Theory of Evolution and the beliefs of evolutionary scientists about the age and creation of the earth.

Creation science shows that dinosaurs lived in harmony with other animals, (probably including in the Garden of Eden) eating only plants[4]; that pairs of each dinosaur kind were taken onto Noah’s Ark during the Great Flood and were preserved from drowning[5]; that many of the fossilized dinosaur bones originated during the mass killing of the Flood[6]; and that possibly some descendants of those dinosaurs taken aboard the Ark are still around today.[7] At least 300 distinct genera of dinosaur have been identified.[8]

But conspiracy theories are by no means restricted to right-wing ideologues, Maddow pointed out. Take, for example the lefty theory that George W. Bush wore a hidden listening advice during his debate with then-candidate John Kerry. And, today, there’s the theory going around that Mitt Romney cheated during Wednesday’s debate in Denver by sneaking in a crib sheet. And, really, who can argue with grainy, slow-motion YouTube videos? That is, after all, how I learned which politicians are actually lizard people.

Maddow got to the crux of the problem with such theories by asking what, exactly, we are to learn to take away from them. How is Obama supposed to approach the next debate if this theory is true? With cheat notes of his own? By accusing Romney of undermining the debate rules? The accusation that Romney won the debate by cheating, Maddow said, is not only factually untrue, it also does not do Obama any favors and won’t help him prepare or perform better in the future.

But back to the right. The most recent conspiracy theory floating around now comes courtesy of Jack Welch who, as Maddow noted, is a minority owner of MSNBC’s parent company, Tweeted that the new jobs numbers had been manipulated by the “Chicago guys” in the White House. Reps. Allen West and Paul Broun, Fox News’ Eric Bolling, radio host Laura Ingraham, and others also turned to Twitter to express their doubts about the veracity of the September jobs report. The right is, Maddow said, essentially building its own “Irantranet” because the facts did not sit well with them and so they had to create a new, alternate reality in which the White House is tampering with the Bureau of Labor Statistics to present the public with false information, with a lie.