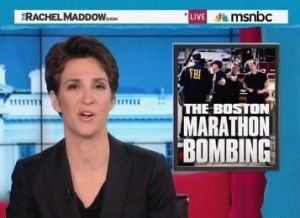 Rachel Maddow took some time tonight to address the New York Post for its whopping front-page splash of two men they claimed were people actively being sought by the FBI. Which they did by running their image under the huge headline “BAG MEN.” The Post has stood by the decision and not officially apologized yet. Maddow said the paper “all but accused” the two men of being suspects, calling it a “disaster” and saying the fact they haven’t apologized yet means “they just don’t care.”

Maddow called the Post‘s story yet another media “failure” following the erroneous reporting yesterday by CNN, Fox News, and others that a suspect had been arrested by the FBI. She showed the Post cover, making it clear that “the Post did not blur out these guys’ faces, we did.” She tore into the paper for calling them the “BAG MEN” even though they had nothing to do with the bombing.

She acknowledged the “minor update” the Post made in clarifying the two men were “cleared by investigators,” but they still have not apologized yet. She reminded viewers that this “disaster” came on the heels of the same paper touting that a Saudi national was identified as the main suspect, for which they did not apologize either. She concluded, “Apparently, they just don’t care.”