Maddow to Iraq War Architects: ‘Your Opinion is No Longer Required’ 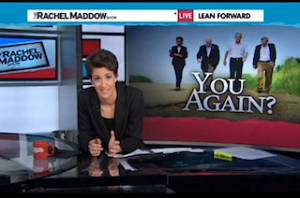 In the last few minutes of her MSNBC show Wednesday night, Rachel Maddow took a look at some of the architects of the Iraq War who have been coming out of the woodwork over the last few weeks to weigh in on the Syria debate. Maddow had a strong message for people like Donald Rumsfeld, who have questioned President Obama’s decision: “Your opinion is no longer required.”

Maddow argued that the reason President Obama is having such a hard time convincing Americans that we should intervene in Syria because Bashar al-Assad has used WMD’s is “because of of the way the other guys broke that argument by misusing it, by lying when they made it.” And now, “the Bush Administration is staging a real time reunion” to weigh in on Syria.

The host proceeded to show how nobody is asking former FEMA chief Michael Brown for hurricane advice or Lance Armstrong to give his opinion on steroid use in sports. “You would not seek their advice, their counsel, their wisdom on the thing that ended their careers,” Maddow said.

She concluded her show with this plea:

“If you’re an architect or a conspirator or one of the primary actors in the Iraq War–in arguably the grandest and most craven foreign policy disaster in American history–your opinion is no longer required on matters of war and peace. Please enjoy painting portraits of dogs or something. Painting portraits of yourself in the bathroom, trying to get clean. Please enjoy the loving comfort of your family and loved ones, and your god. But we as a country never ever need to hear from you about war, ever again. You can go now.”