Maddow To Romney: Hope ‘History Forgives You’ For Embracing Trump 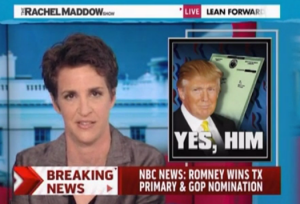 Rachel Maddow railed against the Donald Trump/Mitt Romney alliance on Tuesday night. Chronicling Trump’s involvement in the political arena, Maddow had a question for Romney: is it really worth supporting Trump’s conspiracy theories in an effort to gain votes?

Maddow noted how Romney reincarnated Trump as a Republican political figure, following his “fake” potential presidential run. He even threw Ann Romney a birthday party. By then, Trump had recorded more than 30 robocalls and participated in more than 50 radio interviews in every state holding primaries in that two-month period. “Mr. Trump is not a random supporter of the Romney campaign; he is a centerpiece of the Romney campaign,” Maddow said.

With the credibility and platform that gives him, he is busy advancing “what is still his main — and dare I say, only — political message”: his persistent questioning of whether President Obama was born in this country, and whether his birth certificate is authentic. This isn’t the past, Maddow said. This is happening now, while Romney is holding a fundraiser with him.

Maddow went on to note Romney’s response, “a profile in courage.” Asked about Trump, Romney had said he doesn’t 100 percent agree with everyone who supports him and vice versa — and went on to plainly state he needs “50.1 percent or more,” and he’s “appreciative to have the help of a lot of good people.”

Noting that the aforementioned fundraiser is expected to bring in about $2 million, Maddow argued $2 million is nothing to Romney. That he’s spent so much of his own money in his past campaigns, it’s how much he “might conceivably have in his wallet at any given moment.”

Is that amount of money worth it? Maddow pressed further, asking whether we’re the kind of country “where you gain more votes than you lose by associating yourself with an insane conspiracy theory like this.” Romney apparently thinks so, she said.

One day in the future, when you look in the mirror, she said, “you hope that history forgives you.”