Maddow: Trump Has Brought Birtherism ‘From The Sea Of Kookery Into The Conservative Mainstream’
video

Maddow: Trump Has Brought Birtherism ‘From The Sea Of Kookery Into The Conservative Mainstream’ 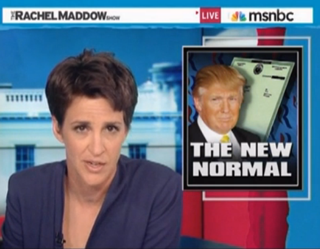 Birtherism isn’t a fringe message anymore. At least that’s what Rachel Maddow argued tonight, crediting Donald Trump with returning what was a mostly dead conspiracy theory to the fore, where now Congressional candidates like Pete Hoekstra are actively calling for investigations despite the clear existence of a legal, long-form birth certificate.

Maddow began by pointing and laughing at a sentence about gun rights on Romney’s website, where he says he will defend the right of Americans to “hunt, shoot, and protect their families.” Unfortunately for Maddow, as tempting as it is to believe that the verbs “hunt” and “shoot” extend to “their families,” the Romney campaign’s strategically-placed Oxford comma prevents this from being an “eats shoots and leaves” error. But enough about grammar– birtherism was the topic tonight, and more generally, Romney “wondering aloud about the qualifications of the President to hold office,” whether it be business experience or place of birth. “Mr. Trump has become central to the Romney campaign,” Maddow noted, and in doing so has “resurrected the rattling claptrap” that the President may not be a natural-born citizen.