Maddow: Unless GOP Rejects Racists On Their Side, They’ll Continue To Be Party Of ‘Aggrieved White People’
video

Maddow: Unless GOP Rejects Racists On Their Side, They’ll Continue To Be Party Of ‘Aggrieved White People’ 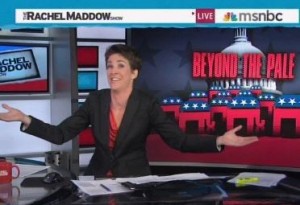 Rachel Maddow opened her show tonight bringing up a whole laundry list of racial issues the Republican party hasn’t really dealt with, especially the hiring and public embracing of people with white supremacist ties or views. Maddow declared that unless the GOP attempts to make some kind of multi-racial outreach our at least rejects some of the more outlandish things said by members of their party, they will continue to be “the party of aggrieved white people.”

Maddow opened by noting the awkward history Rand Paul and his father Ron have had with racial issues in the past, and how the elder Paul furiously denied his personal involvement in the racist writings during his 2008 presidential campaign. But the guy who many of the writings are attributed to is now on the board of the Ron Paul Institute, started right after Paul left Congress.

RELATED: Former NY Times Columnist Vents On GOP: ‘This Is A Party That Wants To Do Harm’ To Blacks

That brought Maddow to today’s news about a Rand Paul staffer who used to wear a Confederate flag wrestling mask to work and who likes to call himself “the Southern Avenger.” He actually believes John Wilkes Booth‘s heart was in the right place, and even toasts his birthday.

But as Maddow argued, this isn’t just a “Paul family affliction”since the “Southern Avenger” also helped former senator Jim DeMint co-write his book, and DeMint is now running a think tank that had an anti-immigration report co-written by a man who believes “you can qualitatively rank human beings intellectually by race.”

“Should the Republican party be just the party of aggrieved white people, even to the extent that it may stray occasionally into Confederate territory in order to do that–do you want that in order to maximize every possible white vote you can get out of an electorate that is less and less white all the time? Does the party want that? Or does the party want to try to have any multi-racial appeal at all?”