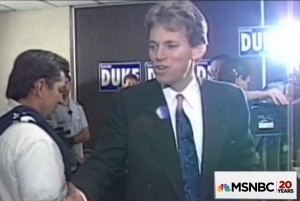 It has been a peculiar, yet unsurprising, phenomenon to watch the mainstream media simultaneously exploit Donald Trump‘s racism even as they downplay it during this presidential campaign, but even more peculiar has been the tendency of mainstream media liberals to gloss over 40 years of mainstream Republican racism in order to pose Trump as some sort of aberration. Case in point: Wednesday night’s The Rachel Maddow Show, which featured an extended history lesson on the election campaigns of David Duke.

The premise of the segment was that Trump’s candidacy has gone so awry that Republicans might just dump him en masse, as they did with Duke during his run for Louisiana state legislature, an event which host Rachel Maddow called “inspiring.” True to form, it was an absorbing segment, replete with the sort of compelling archival footage that Maddow’s a-blocks are famous for, including this gem:

Lee Atwater: And this man’s got a 20-year history participating in Ku Klux Klan and Nazi activities. There’s no place for this in the Republican party, not as long as I’m chairman.

Ronald Reagan: John has always worked for the traditional values and principles which you and I cherish.

Now, anyone who’s the least bit familiar with the politics of the day likely got a hearty, if bitter, chuckle out of that clip, but Maddow decided not to let any of her viewers under the age of 30 in on the joke, instead playing this as some great moral stand that today’s Republicans should emulate.

The joke, of course, is that that first guy, the one saying there’s “no place” for Duke in the Republican Party? That’s Lee Atwater, the brains behind the most notoriously racist ad campaign in modern presidential political history, the Willie Horton campaign. That other guy, the one saying that Duke’s opponent “has always worked for the traditional values and principles which you and I cherish?” That’s former President Ronald Reagan, a maestro of the racial dog-whistle in his own right, who kicked off his winning presidential campaign with a rally at an infamous Civil Rights-era crime scene. The two of them could not more ably symbolize the Republican Party’s decades-long foreplay with resentful white male Americans if they were literal ostrich feathers.

Their repudiation of Duke wasn’t some inspiring act of courage, it was a panicky attempt to conceal what Duke revealed, and what Trump is revealing: that white male resentment has been the rocket fuel that Republican politics have run on for forty or fifty years now. Trump has just decoded it. It’s no accident that that reporter said that “David Duke sounds like a Republican,” or that current House Majority Whip Rep. Steve Scalise (R-LA) once called himself “David Duke without the baggage,” because Republicans have long relied on these people to know when they’re being spoken to, while allowing those in denial about these appeals to remain there.

Why do TV liberals allow Republicans to skate on their complicity with decades of race-baiting? Part of it is a desire to remain on good terms with their Republican friends, but they’re also invested in trying to peel Republicans away from Trump, which is made difficult if they tell the truth about them. It’s similar to the mainstream media, which is invested in crediting Trump’s appeal to anything they can think of besides the racism because it lets half of their audience off the hook.

What none of them understand is that racial resentment is a forgivable sin, but one which cannot be addressed if it is ignored. It’s an ignorance that stems from having no practical investment in ending it.