Maddow Wonders Whether Press Can Cover Clintons Fairly Without ‘Nonsense’ 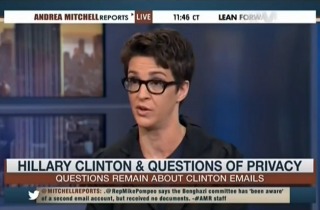 Rachel Maddow told Andrea Mitchell on Wednesday that she believes the beltway press are unable to fairly cover the Clintons because of all the loud “noise” and “nonsense” surrounding the email controversy.

They said the hostile relationship was exemplified in a 1994 press conference when Clinton, as First Lady, took questions for an hour relating to everything from Whitewater to the death of Vince Foster. Critics of Clinton will never be satisfied, Maddow said, citing Rep. Trey Gowdy‘s (R-SC) request that Clinton turn over her servers to a third party investigator.

“The political truth of it is that there is no analog in mortal life to Hillary Clinton as a political being,” Maddow said. “Nobody has lived the life that she has, nobody is treated the way she has.”

She continued: “I think the bottom line here is that there’s a real question as to whether or not Hillary Clinton gets vetted effectively and fairly as a presidential candidate — particularly one who’s not going to have a challenging primary — given the amount of static there is about everything she does. The media noise and static and nonsense around her is so loud, it’s very hard to have effective reporting that people might actually care about, about what she’d be like as a national leader.”

She said a lot of the coverage of Clinton’s Tuesday press conference has amounted to “scrum” and “stupidity,” and as a result she worries whether the beltway press corps even knows how to cover the Clintons “without treading into real nonsense.”