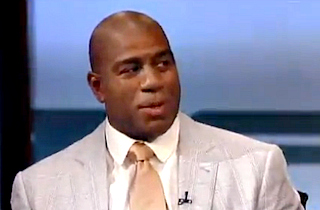 Johnson recalled that he’d met Sterling early in his career and had a friendship with him, and so was particularly taken aback by being the subject of the rant. “You can’t understand how hurt I was,” Johnson said. “And I was hurt for all African Americans, and all minorities.”

“There’s no place in our society for it, and there’s no place in our league,” Johnson said. “He’s put his own team in a tough situation. So I believe that once Commissioner Silver does all his due diligence, gets all the information gathered, he’s gotta come down hard. [Sterling] shouldn’t own a team anymore. And he should stand up and say, ‘I don’t want to own a team anymore.’ Especially when you have African Americans renting his apartments, coming to the games, playing for him, coaching for him. This is bad for everybody.”