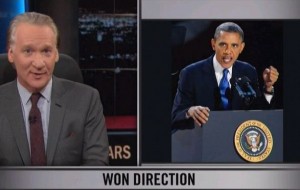 While progressives may be happy that President Obama will be around for another four years, Bill Maher warned them not to get too complacent, and pointed out that now Obama no longer has to run for reelection, they can “hold his feet to the fire” on a number of important progressive issues, from the drug war to the the defense budget. Maher said that after four years of conservatives accusing Obama of being an “angry black man with a liberal agenda,” the president should do… just that for the next four years.

After pleading with the American people to never speak the name of Mitt Romney again, Maher said that progressives need to actually hold Obama accountable. He said that “with no more elections to win,” Obama shouldn’t have to worry about “kiss[ing] the asses of coal miners” or pretending the defense budget should be this large. Maher said that the United States has the same problem with the defense budget as Mrs. Petraeus has with her husband: “it’s swollen and we can’t bring ourselves to touch it.”

Maher also recommended Obama rethink the war in Afghanistan, because terrorists would never suspect “a surprise retreat.” He also said ending the War on Drugs needs to be a priority, and “if conservatives bitch about it, throw states’ rights back in their face.”