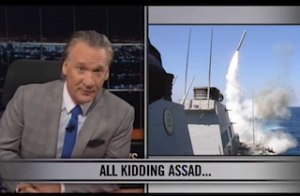 For his final New Rule of the night, Bill Maher returned to Syria and this week’s 12th anniversary of 9/11. With the country on the verge of bombing another Muslim country, Maher said, “America must stop asking, ‘Why do they hate us?'”

“We’re starting to look not so much like the world’s policeman, but more like George Zimmerman,” he explained. “Itching to use force and then pretending it’s because we had no choice.” As much as he hates chemical weapons, Maher said, “We have to stop bombing Muslim countries if we ever want to feel safe from terrorism in our own.”

“How did we inherit this moral obligation to bring justice to the world via death from above?” Maher asked. “It doesn’t make any sense. Our schools are crumbling and we want to teach everyone else a lesson.”

Subtly mocking the entertainment industry’s typical peacenik stance, Maher said, “I am no fan of Assad, and I say that openly. I don’t care if it costs me jobs in Hollywood.” He also made fun of America’s tendency to “muse out loud” about who we’re going to bomb. “People in other countries don’t talk like this. Probably because if they did, we’d bomb them!”

He ended his closing rant by remembering the time, just after September 11th, 2001, when he sat down with Howard Stern, who suggested bombing any Muslim country at random. “And I remember thinking to myself, ‘Really? Bomb any Muslim country? That’s the policy? Just get a map of the Middle East and throw a dart at it?'”

“Well apparently George W. Bush was listening,” he concluded, “because that’s exactly what we did.”