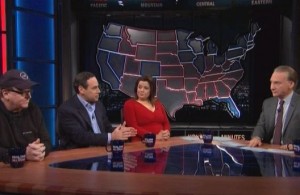 Bill Maher said tonight that he’s getting tired of Fox News and the Republican party trying to make hay of the attacks in Benghazi as if there’s some kind of huge conspiracy to cover up what happened and intentionally mislead the public. Maher also blamed a huge chunk of this overblown outrage on Fox News for continuing to push the story almost 24/7.

RELATED: Petraeus Testifies On Benghazi: Reference To Terrorism Was Edited Out Of CIA Talking Points

After a nice bout of Republican bashing, Maher brought up the recent trend of prominent GOP politicians speaking out against the “simplistic” nature of the conservative message, and both he and David Frum placed the blame squarely on Fox News. Maher said that modern conservative media creates such a climate of misinformation that Republicans are trapped in the bubble. He said if conservatives really want to turn a new corner, they should stop watching Fox.

And talking of Fox News, Maher wanted to know why they continue pushing the idea that there was some kind of huge cover-up over the Benghazi attacks. Frum said it was triggered by an early “deception” by the Obama administration that it was a result of that anti-Islamic video. Ana Navarro insisted an investigation is completely warranted, to which Michael Moore scolded her for trying to gin up a bigger controversy than is warranted.

Frum admitted that while there is some legitimacy to the questions being raised over Benghazi, Fox News has been “running with the scandal and making it bigger.” Maher pointed out that while Republicans are piling on Susan Rice for going out and saying what she was told while Condoleezza Rice was the national security advisor on 9/11 and the same questions were not raised about her. Navarro tried to push back by citing the Petraeus testimony today, but Maher reminded her it was a closed-door testimony and she’s basing her comments on what Republicans have claimed Petraeus said.