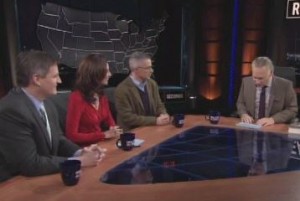 Bill Maher tonight squared in what he views as a giant hypocrisy in the Republican party on the issue of cutting spending. On the one hand, tea partiers say Washington has a spending problem, but in a video Maher played, featuring New Jersey tea partiers affected by Hurricane Sandy, none of the people interviewed was willing to cut any of the biggest expenditures. This led Maher to rant against the supposed wisdom of the American people, saying “the people are morons, they don’t know what to tell the politicians…, they don’t know anything.”

RELATED: Maher And Maddow Battle GOP Panelist Over Ryan Budget: ‘Ballsy’ To Propose That After ‘You Get Your Ass Kicked’

On the spending point, Republican columnist John Feehery said Paul Ryan should get some credit for trying to seriously address spending, noting how Maher himself said last week he thinks he is getting taxed too much. Maher clarified, “I said there’s a limit.” Former New Jersey governor Jim McGreevey pushed back, saying that Ryan’s budget hurts the poorest people at the expense of the wealthiest.

Maher brought up the Republican “autopsy” released this week, and while he admitted there were some “enlightening things” in the party’s self-reflection, he said that one of the GOP’s biggest problems is that their economic policy just does not do well with middle class elections. Feehery acknowledged that the GOP needs to do a better job expanding the base and “being less offensive to people.” McGreevey admitted that they could probably survive sticking with the same economic policy so long as they “get off the social issues.”