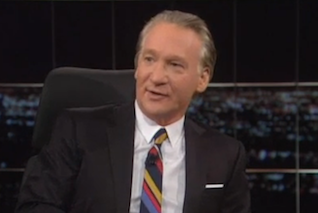 “I found this to be nauseating,” Maher said. “First he sends them off to war to get their limbs blown off, then he has them over for a barbecue. This is like the Cleveland guy having a pizza party for those girls he had in his basement.”

This got quite the reaction from the normally encouraging Maher crowd, though they did end up applauding.

“Maybe that’s a little much,” one of his liberal guests said.

“I think it’s sort of sadistic when something like that happens,” actress Brit Marling said. “The idea that these amputees—the technology that’s allowing them to do this is somehow something to celebrate? People shouldn’t be over there losing limbs in the first place.”

“Well, wait a minute, these guys are certainly celebrating their prosthetic limbs,” said James Poulos, a HuffPost Live producer. “W said ‘I don’t pity these guys, because they don’t pity themselves.’ That doesn’t transcend the fact that the Iraq War was a colossal shit show, but it does transcend the fact that there’s kind of this uncomfortable irony between Bush’s relationship and these guys. They’re all out there biking together, and that’s okay.”

“I never know what side you’re on,” Maher told Poulos. “Are you with us or against us?”

“What was really jarring about that interview was the fact that President Bush needed to tell himself that he really tried diplomacy,” said Neera Tanden, President of the Center for American Progress. “It’s sort of a weird thing that he has to look back and make up things that he did.”