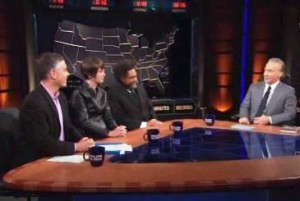 Bill Maher opened his panel discussion tonight discussing race in the George Zimmerman murder trial. Cornel West was very adamant in speaking out in favor of Trayvon Martin and slammed Zimmerman for criminalizing Martin before actually killing him. West continued to list examples of how young, poor black men are consistently, unfairly singled out in the American criminal justice system.

Matt Lewis framed the whole trial as the “wannabe gangster versus the wannabe cop,” but West shot back that Martin was just reacting to being followed and that he wouldn’t have died in the first place if Zimmerman had stayed in his car. They engaged in some loud crosstalk, with West stating that Martin was “criminalized” before he was “physically murdered.”

West continued to claim that a young black person is shot every 28 hours in America, and that young blacks in general are abandoned and constantly “under intense police surveillance.” Liz Mair found the focus on this particular case troubling when “there’s a whole range of violence that we’re not talking about.” Maher brought up how Zimmerman got involved in the neighborhood watch after a string of burglaries in his neighborhood. He asked, “Why in this country do young black people still have no better prospects than committing petty theft?”

West declared, “The criminal justice system itself is criminal.” He said that Wall Street executives can get away with practically anything, but people are freaking out about marijuana in Martin’s system. On the question of whether blacks commit more crime, Mair agreed that it’s harder to go after white-collar crime and fraud. West added that young blacks and whites consume drugs equally, but blacks are jailed more.