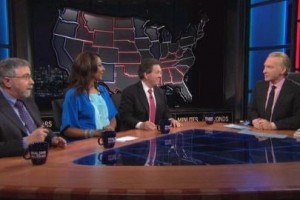 Newark Mayor Cory Booker has been in the spotlight all week after his comment on Meet the Press that the Obama campaign’s attacks on Bain Capital and private equity are “nauseating.” Bill Maher made it clear he disagrees with what Booker said, but claimed that Booker may have only done it because he didn’t want to anger rich people in order to get their money to help his city. He sympathized with Booker, saying he knows the mayor needs to “kiss the asses of the rich people on Wall Street.”

Maher first explained that he admires the mayor and calls him a great example for what a civil servant should be. But he still found a problem in Booker’s comments because, he argued, venture capitalists aren’t exactly “on the side of the little guy” and so there’s no really big deal about the Obama campaign targeting Romney’s ties to the industry in ads.

New York Times columnist Paul Krugman put it charitably by saying that while all private equity people “are not evil,” the changes in this sector since the 1980s have been “a lot for the worse,” and found it disturbing that anyone would condemn such criticisms as anti-American. Maher joked that he’s helping pay for the Obama campaign’s ads, which he noted are featuring, in some cases, average Americans railing against businessmen like Romney.

Maher did provide a possible reason for why Booker said what he did: he doesn’t want to make an enemy out of the rich.

“Cory Booker, the mayor of Newark, has to beg rich people to subsidize his city. Mark Zuckerberg gave 140 million dollars… to the Newark school system because we now have to beg rich people for money, otherwise known as feudalism… I’m not defending what Cory Booker said, I’m saying I understand why he has to kiss the asses of the rich people on Wall Street because there’s no other way to keep his city afloat.”