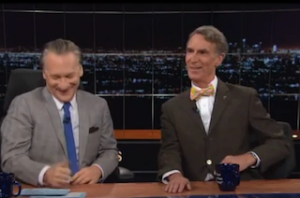 Bill Nye (the Science Guy) has made a career out of explaining scientific facts to children, so last night on Real Time, Bill Maher asked him to explain to Republicans why the Earth is more than 5,000 years old. Nye resisted the urge to outright lecture the GOP, but he did tell Maher and his guests why America needs to start embracing science in a bigger way.

“Innovation is what’s going to make the United States economy grow,” Nye said. “And in order to have innovation you have to have scientifically literate students.” While this may seem like an “objective” idea, Nye pointed to people in Texas who want to have Creationism in textbooks as an obstacle to this idea.

“You’re quoting facts. How much do we really know about facts?” Maher said, playing the conservative. “That’s the problem, that facts themselves have become subject to debate.”

Maher took particular delight in a story about the time Nye told an audience in Waco, Texas that, despite what it says in Genesis, the moon is not actually a light itself, it just reflects the light of the sun. Of course, this caused one woman to drag her child out of the room by the wrist.