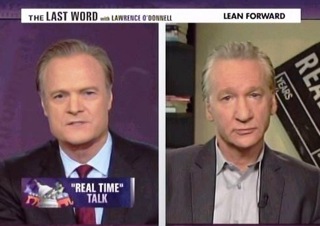 Bill Maher stepped out of his weekly stage on HBO to visit Lawrence O’Donnell tonight and comment on last night’s dueling debt crisis speeches, andhe was not a happy camper. Telling O’Donnell that he was “terribly disappointed” in President Obama, Maher expressed frustration in the way that the President appeared to “cave in,” took “credit or blame” for the fame of Grover Norquist, and couldn’t avoid calling Republicans “assholes” on MSNBC.

“I like Obama so much, I’m always trying to understand what he’s dealing with,” Maher told O’Donnell, explaining that he was “terribly disappointed” and couldn’t understand the strategy. “I never thought he would be caving on the revenue side of it, I thought that was his line in the sand,” Maher noted. He didn’t seem too surprised as to the way the Republicans were acting– “the Republicans are certainly assholes,” he quipped before remember he wasn’t on HBO– but the President, he railed, “never plays on his own turf.” “How do you win if they get everything they want and you sign it?” he asked. Maher concluded that President Obama was not governing like a Democrat, instead “arguing with himself about their agenda” in such a way that “the Democrats will get blamed for implementing Republican policies.”

O’Donnell then turned to a leading conservative voice that claimed to be attempting to get the President to do just that: Grover Norquist, who he credited Maher with putting on the map. “The first time I ever saw Grover,” O’Donnell noted, “was on Politically Incorrect.” Maher took “credit– blame, really– for Grover Norquist,” as well as Ann Coulter and Laura Ingraham, who he said he put on air as “foils” but “I guess they’re having the last laugh.” He noted that the pledge Norquist was attempting to get Presidential candidates to sign was another attempt to get them to think for themselves less, joking, “I think he came up with that pledge in high school.”

Maher also revealed the contents of a pledge that he would pass around if he were a pledge sort of person, which included, predictably, “no more stupid pledges,” and a promise to “stop lying to the American people… saying that the best days are ahead of us,” a pledge O’Donnell jokes is probably having its signatures “come slowly.” Maher concluded that Republicans– unlike comedians who have money to lose– “want to see a calamity” because they have “nothing to launch a crusade [against Obama] about… to forever destroy this presidency,” unlike, say, Bill Clinton with Whitewater or the Monica Lewinsky scandal.