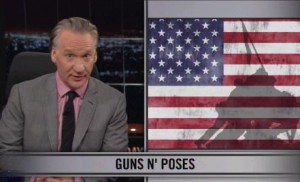 Bill Maher closed out his show by declaring that America needs to stop saying it’s the home of the brave and start acting like it. He cited the nation’s huge defense budget and compared the United States to a paranoid crazy man who keeps spending money on alarms and guns and cameras but doesn’t have enough left over to take care of his house or send his kids to college. Maher asked, “would you call him brave?” before comparing the nation’ emphasis on defense to American manhood.

Maher bemoaned how the United States now seems to be full of “dickless armchair warriors,” starting with Manti Te’o. He joked that despite Te’o’s numerous head injuries, he still answered Katie Couric‘s questions better than Sarah Palin. But Maher mostly saw Te’o as a symbol of American manhood, that this big football player never had sex with his “girlfriend” and they instead played out an entire “relationship” online.

Maher said that Te’o’s attachment to this fake girlfriend is just as “weird” as the attachment football fans have to their favorite players, suggestively insinuating there is something creepy and obsessive about it. Maher highlighted how there are now pills to deal with low testosterone, declaring that “men are in trouble when you have to juice like Lance Armstrong just to get through your anniversary.”

Maher said that all the hunting and gathering is now done by the women, and “the most masculine thing we doo all day is pee standing up.” Maher brought it right back to the Pentagon, saying it has more weapons than it need, but not more than it wants. And as Maher asked, when you own that much weaponry, aren’t you trying to compensate for something?