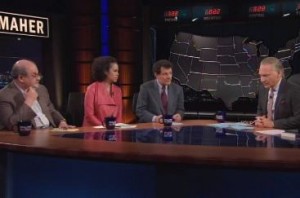 Regular viewers of Bill Maher‘s show are well aware that one of the issues that gets Maher most fired up is the equal apportionment of senators to each U.S. state. Amidst discussion of the Boston bombings and gun control tonight, Maher went on a small rant against the Constitution and how every state does not deserve the same number of senators. He found it ridiculous that a small state like Wyoming gets as many senators as a huge state like California.

The panel was discussing gun control and why it failed in the Senate this week. Maher found it ridiculous that background checks, something supported by 90 percent of the people, failed to pass the Senate. He slammed the filibuster as a “silent coup” but also went after the Constitutional designation of two senators per state.

Maher pointed out that senators from small states are being elected by, and therefore represent, less people, so there should be proportional representation, like in the House of Representatives.

Salman Rushdie railed against the idea that the Second Amendment allows for unrestricted individual access to whatever weapons they want. Conservative pundit Amy Holmes questioned Maher wanting to reconstitute the Senate, and Maher shot back that the Constitution was not “brought to us by Jesus” and that the Founders themselves wanted it to be amended every so often.

Rushdie said that the United States is the only western democracy in which there are amendments to the basic idea of a simple majority win. When Nicholas Kristof brought up how conversations like these alarm people in North Dakota, Maher asked, “Why do we need two Dakotas to begin with?”

Maher also spoke out against the constant threat members of congress face of being primaried which forces them to lean ideologically way over to one side.