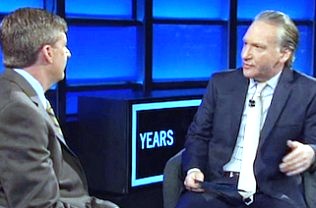 “It sounds like you’ve been hanging around with Nancy Reagan in 1983,” Maher told him.

“I used to have your position, I used to think marijuana was no big deal,” said Kennedy, who leads the organization Smart Approaches to Marijuana. “When I learned more of the facts, I changed my views on this.”

Kennedy’s primary complaint was that legalization would lead to rampant use among children. “If you give a permissive environment you’re gonna have more kids use,” he told Maher.

“Come on, man,” Maher said. “This is like global warming denying. This is stuff we heard years ago.”

Kennedy argued that the marijuana legalization would primarily benefit major corporations, who would follow the tobacco industry’s lead in targeting children.

“You’re reasoning is adults shouldn’t do things because kids might,” Maher said. “Adults shouldn’t have fire or drive cars under that reasoning, too. Kids might do all sorts of bad things. Parents have to stop them and teachers have to stop them…It just seems so un-Kennedy like to be against what I called two weeks ago was the new gay-marriage. It is the new civil rights movement.”

“I led the effort in Congress for drug courts, because I don’t believe people out to be incarcerated because of an addiction,” Kennedy said to applause, the only time in the segment the audience was with him. He insisted that if the public knew the facts about marijuana, they would change their minds about the drug. “If you legalize, there’s going to be greater use, that’s a fact.”

“You still haven’t proved to me why that’s a bad thing,” Maher said, but added, “I don’t think kids should use it.”

This was Kennedy’s sticking point. “We know with a developing brain, if kids think there’s no big deal with this thing, and more of them use, it’s going to impact their developing brain. The bottom line is if we care about kids’ healthy development, why do we want to add a new drug—”

“Well, it’s hardly a new drug,” Maher said, and then pivoted to the rehab industry. “It’s money. The more people we put into rehab, for reasons that they don’t belong there, the more money for people. I assume these people smell money there for a reason. It’s the same reason we have so many people in prison—because we’re making customers out of people who should not be customers.”