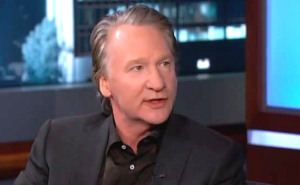 America got a preview of what we can expect from the 13th season premiere of HBO’s Real Time this Friday night when Bill Maher joined Jimmy Kimmel and unleashed his anger on Muslims who “applaud” an attack like the one that killed 12 people at Charlie Hebdo’s Paris offices and declared that politically correct liberals have turned this country into “Pussy Nation.”

“This was big shit,” Maher said of the attack on people who make jokes for a living. “And we to not avoid who did this.” When Kimmel started saying, “we presume” Maher cut him off. “No it’s not a ‘presume.’ No, no, it’s Muslim terrorists. This happens way too frequently. It’s like Groundhog Day if the groundhog kept getting his head cut off.”

After running down some of the worst atrocities committed on behalf of Islam in Muslim countries and the hesitation to condemn the religion as a whole, Maher said two words: “Pussy Nation.”

While Maher said most Muslims would not have actually carried out the attack in Paris themselves, he said, “Hundreds of millions of them support an attack like this, they applaud an attack like this. What they say is, ‘We don’t approve of violence, but you know what? When you make fun of the Prophet, all bets are off.’”

You can expect more where this came from when Maher’s show returns to the air Friday night.