Maher Savages ‘Cryptkeeper’ Congressmen: ‘When Did We Become This Weekend At Bernie’s Government?’
video

Maher Savages ‘Cryptkeeper’ Congressmen: ‘When Did We Become This Weekend At Bernie’s Government?’ 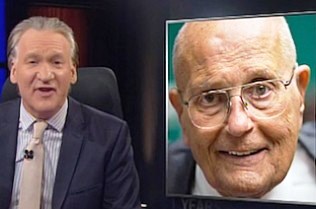 “There are only three ways a congressmen goes out,” Bill Maher said at the start of his New Rule segment on Friday night. “They die in office, they cash in as a lobbyist, or they mistakenly tweet a picture of their dick.”

Maher demanded that Congress change its seal to a picture of Mark Rosenthal, an obese union boss who was fired last week after photos emerged of him sleeping on the job. Maher wants the same standard applied to octogenarian congressmen who have withered in their seats—like Representative John Dingell, who was celebrated last week as the longest serving member of the legislative branch.

“There’s a difference between public service and hoarding,” Maher said, pointing out that Dingell came to office before Obama was born in Kenya.

“Congressman Ralph Hall of Texas is ninety and he’s running for reelection,” Maher continued, “which would be cool if he was one of those spry old guys who does the crossword and plays tennis every morning. But he’s not that guy! He said recently that he doesn’t believe in climate change and that really he’s more fearful of freezing. Yes, because you’re ninety!”

Meanwhile, when Superman-understudy Cory Booker licked his lips last year over now-deceased Frank Lautenberg’s seat, an aide called it disrespectful. “Really?” Maher asked. “The guy who runs into burning buildings shouldn’t take over for the other guy who can’t blow on a piece of paper and make it move across the table?”

“This is not about age,” Maher said, “this is about congressmen who suck at their jobs because their jobs are never at stake. We’ve created a system where it’s almost impossible to beat an incumbent. The districts are too gerrymandered, the ads are too expensive. So every few years we’re treated to the sight of some cryptkeeper who hasn’t shown up at work for years being wheeled out by a staff member so he can raise his skeletal hand to vote ‘aye.'”

The best example of this was 101-year-old congressman Strom Thurmond, “who raped the maid the year Fitzgerald wrote The Great Gatsby, but who was still voting in 2001 on issues like stem cell research even though he once referred to a microphone as the machine. When did we become this Weekend At Bernie’s government, where Senators are coaxed into key votes by someone whispering in their ear, ‘Who wants pudding?'”

“George Washington was the greatest American because he set the precedent of walking away,” Maher concluded. “If anyone in our history was indenspensible it was him, and he said, ‘No thanks, I just want to watch SportsCenter in my underwear.”