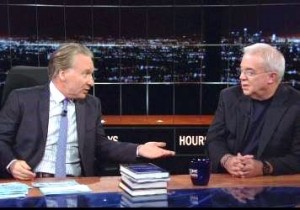 Bill Maher is no fan of religion, but he opened his interview with liberal Evangelical minister Jim Wallis by calling him “one of the good ones.” But what bothered Maher so much is why someone like Wallis, who believes in civil disobedience and supports the rights of gays and other minority groups, would put stock in a document written thousands of years ago that has no problem with slavery and polygamy, and considers homosexuality an offense punishable by death.

Maher told Wallis that the Bible clearly “hates fags,” although Jesus himself never talked about homosexuality, and asked, “How do you reconcile this idea that it all comes from the Bible, but the Bible is so flawed” and full of “nonsense” and “viciousness”?

Wallis countered that people who talk about the Bible haven’t exactly read it, though Maher protested he did. Wallis played up how he had a group of religious people rallying for immigration reform in D.C. because of their faith, but Maher interjected to say, “You’re cherry-picking the good parts.”

Maher told Wallis that it’s hard for someone to say God is “perfect” when there’s a lot of twisted morality in the Bible itself.

“It’s pro-slavery, pro-polygamy, it’s homophobic, God in the Old Testament is a psychotic mass murderer–I mean, there’s so many things in it, and I always say to my religious friends, you know, if a pool had even one turd in it, would you jump in?”

Wallis explained how he found there to be 2000 verses in the Bible talking about the poor, but two more times Maher called him out for not answering the question. At one point, he quipped to guest Eliot Spitzer, “This guy’s an even better politician than you.”

Wallis argued he’d only like people to take the Bible literally “when it says love your neighbor as yourself,” and when Maher shot back about the Bible commanding people to kill neighbors who work on Sundays, he brushed it aside and said Jesus didn’t want that. A confused Maher tried to understand. “So Jesus is correcting the Old Testament, which is by his dad, who’s really him. I don’t…”

Spitzer made the case for progressives embracing people like Wallis in order to push back against “fundamentalist religion dictat[ing] our political discourse,” while Reza Aslan made the simple point that literally everyone picks and chooses what parts of the Bible to follow, “even the most literalist literalist.”