Maher Tears Into Panel Over Syria: Obama ‘Looks Like A Pu*sy’ For Obeying Bill Clinton 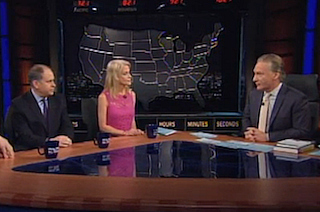 Bill Maher bemoaned the increasingly likely intervention into Syria on Friday night, especially so recently after Obama’s speech about the drawdown of the War on Terror. “Can’t we just sit one of [the wars] out?” he asked. “Does every time the bat signal go off, we have to answer it?”

“James Madison was no match for Bill Clinton,” said conservative pollster Kellyanne Conway, in reference to Obama’s Madison quote during his speech two weeks ago. “I think Bill Clinton helped to goad President Obama into taking this action.”

“Then he looks more like a pussy doing it,” Maher said. “If a guy says, ‘If you don’t do something, you’re a wuss,’ and the next day you do it, it’s like your mother coming to school and beating up a bully.”

Maher noted that the best option, sending weapons, would also involve arming portions of al-Qaida. “This is like picking sides in the Game of Thrones. Isn’t the lesson we learned in the Middle East wars that the easy part is getting rid of the bad guys, but it’s what happens next?”

Harvard historian Niall Ferguson argued that the Syrian dilemma was a result of Obama’s dithering on the Middle East in general, citing “a complete absence of policy from the Cairo speech onwards” and blaming Obama for doing “nothing when the Green Revolution happened in Iran.”

“This is a typical example of what happens when you have no foreign policy,” Ferguson said. “It is very important for you to recognize, and for your audience to recognize, what a disaster this has been, almost from the beginning.”

“A disaster because we didn’t go to war?” Alter asked.

Maher agreed: “Does our foreign policy always have to be ‘Unless you do what we want, we bomb you?'”

“You’re forgetting about unintended consequences,” Alter said. “I’m not against giving some weapons right now in order to advance the peace process, which is what the president’s trying to do…But the weapons stay in the region, they get picked up by al-Qaida or some other military group, and often they get used against us.”

Maher also quoted from Edward Snowden’s interview with Glenn Greenwald about the alleged dystopian capabilities of the NSA’s surveillance programs, the scope of which Maher doesn’t buy.

“This guy’s a little nuts, right?” he said. “These are delusions of grandeur?”

“I think he’s exaggerating his place in history,” said Conway. “He’s neither a hero nor traitor, but he’s engaged us in a conversation that we needed to have. Even if the NSA surveillance has thwarted terrorists and saved thousands of American lives, which I will grant you, they never seem to get the conversations we want them to get. Why aren’t there email exchanges and conversations with Hasan from Fort Hood, or the Boston bombers?

Maher suggested that the surveillance program have a provision similar to one in the failed Manchin-Toomey gun legislation, preventing the establishment of a national registry. “Why can’t we have a provision in the surveillance act that says if you use this for any other reason besides national security,” Maher proposed, “if you go into a sex scandal or any other thing, we will do the same to you. It seems like that would solve the problem.”