Maher to Piers Morgan: CNN ‘Suffers’ by Trying to ‘Play It Down the Middle’
VIDEO

Maher to Piers Morgan: CNN ‘Suffers’ by Trying to ‘Play It Down the Middle’ 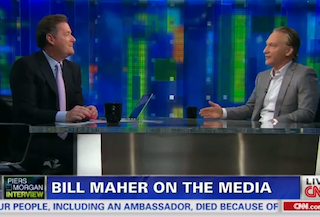 Bill Maher knows why CNN has been perpetually trailing Fox News and MSNBC in the ratings. During his appearance on Piers Morgan Live last night, Maher explained CNN has “suffers to a degree, because it tries to play it down the middle, and people generally want to hear what they already believe in.”

“When we didn’t used to have these places where you could kind of retreat to your ‘ghettoization’ of thinking,” Maher told Piers Morgan, “public discourse was the better for it, because you had to hear a conflicting idea. Now you don’t.” He said this phenomenon is true on both the right and the left, but said Fox deserves more blame for spreading misinformation.

“The difference between Fox and MSNBC,” Maher continued, “is you can fact check what they say on MSNBC and they are very rarely wrong.” Whereas if you fact check what people say on Fox, you will find that “almost every night Bill O’Reilly says something that is insanely off-base and not true.”

He said Republicans are just better than Democrats at “getting their talking points straight” and delivering them over and over again on television. “Facts never get in the way of their talking points,” Maher added. “And so, for people that only listen to Fox News, they can wake up with Matt Drudge, have lunch with Rush Limbaugh and go to bed with Bill O’Reilly, and that’s all they’re going to know, what they hear there. And very often these people do not care what the truth is.”