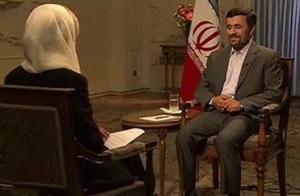 Given all of the pitched rhetoric about Mosques, Koran burning and Islamophobia in today’s political and opinion media, its fair to say that this is a pretty big get. On last night’s NBC Nightly News, Andrea Mitchell spoke with Iranian President Mahmoud Ahmadinejad, who asserted that “muslims do not hate America.”

When asked by a scarf-clad Mitchell about how he felt about the recent Koran burning and “Ground Zero mosque” controversies, Ahmadinejad said, “There is no conflict between the two countries. We should find where the problem is.”

When Mitchell pressed the Iranian leader to explain away the Jewish and Christian leaders who supported the controversial mosque project, as well as critical comments by his “old friend” Fidel Castro, Ahmadinejad seemed put off by her interruptions, tersely saying “you should let me explain.” After some awkwardly (and unconvincingly) polite quarreling, he responded:

When speaking of how President Obama has affected tensions between the United States and Iran, he claimed that there are “certain groups” preventing the commander-in-chief from mending relations. He asked Mitchell, “Do you really think President Obama can do anything he wishes to?”