Major Garrett: Romney Advisor Told Me Problem Is Voters Think ‘He’s Been Too Rich For Too Long’
video

Major Garrett: Romney Advisor Told Me Problem Is Voters Think ‘He’s Been Too Rich For Too Long’ 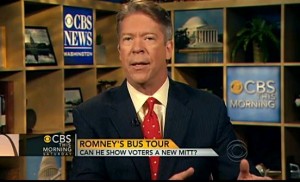 National Journal‘s Major Garrett said on CBS This Morning that Romney’s campaign fully acknowledges the problem their candidate has with reaching out to middle-class voters, and said that one advisor told him that it is not solely Romney’s wealth that makes him appear out-of-touch to voters, but that he has been “too rich for too long.”

RELATED: O’Reilly And Romney Surrogate Try To Figure Out Why More Voters Personally Like Obama Over Romney

Garrett explained that the one thing both campaigns can agree on is that “Romney has a problem connecting with middle-class Americans.” While Romney edges President Obama out in polls asking who would make better economic decisions, voters are still wary of Romney and are not eager to support him because “they’re not sure who he is.” Garrett said that playing up Romney’s personal biography is part of the campaign’s strategy going forward.

As for whether voters will care that much about Romney’s past, Garrett argued that voters care not just about a candidate’s policy positions, but also the candidate’s personal story, and said there is “a gap” that divides Romney’s story with many Americans.

“One senior advisor said something that I think they believe to be fundamentally true. It’s not just that Mitt Romney is rich, he’s been too rich for too long. They believe that’s now become an embedded perception for some undecided voters. They’ve got to find a way to more directly humanize Mitt Romney and make his story more connected and more likable to the average voter.”