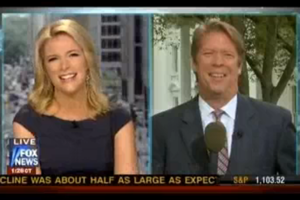 Megyn Kelly was supposed to discuss the national economy with Major Garrett today, but, after talking about it all day, decided to forego the topic. Instead, Kelly and Garrett had a heartwarming exchange in honor of Garrett’s last day at Fox News where we learn, among other things, that Garrett “isn’t exactly a clean freak.”

Garrett announced a few weeks ago that he was leaving the network to work in for the National Journal, returning him to the print world where he began his career. Today, he and Kelly went down memory lane for a segment to talk about the time they shared an office and, Kelly, blushing, discovered a mess of gym clothes and Maxim magazines sprawled around the desk. On her first day! But Garrett later won her over with phrases like “rapacious plutocrat,” and fast forwarding to Garrett’s last day, Kelly seemed genuinely upset to have to say goodbye. As for Garrett, he said his thank yous and addressed his audience directly about his future:

“It’s been a privilege and an honor to serve you, and what I’ve tried to do every day at this job and on every other assignment I’ve had for Fox is serve this audience as best I can and as aggressively as I can. And that’s my only task in this business: to serve the audience that wants to know what’s happening in the world around them, and allow you to figure it out for yourself. I’m paid to do that, it’s the greatest job anyone can have. I’ll do it differently now, but I’ll never, ever forget– and I’ll always fondly remember– my days here.”