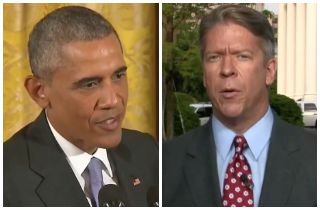 The old saying in news for any reporter was to not make him or herself part of the story. But as POV (Point of View) programming continues to dominate (particularly in most of cable news primetime), reporters/hosts/pundits/anchors becoming bigger than the subjects they’re covering is all the rage when it comes to standing out above the crowd.

One of the last reporters that could be included in the look-at-me-while-I-grandstand crowd is CBS’ Major Garrett. For those who have followed cable news for awhile, you know that Garrett rose to the top of the DC reporting class via Fox News. Like his fellow White House correspondents Jake Tapper (formerly for ABC News, now with CNN) and Ed Henry (formerly of CNN, now with Fox), Garrett (formerly of Fox and CNN) could be checked off in the rather limited “objective, tough but fair” box in what is now an otherwise-partisan environment (CNN’s Jim Acosta, NBC’s Chris Jansing, and ABC’s Jon Karl can be included in the aforementioned OTBF box as well).

So it’s interesting to hear the criticism being volleyed Garrett’s way when it comes to his line of questioning of the president earlier today. In case you missed it, Garrett asked how Mr. Obama could be “content with all the fanfare around this (nuclear) deal” with Iran after missing the opportunity to include four Americans languishing in Iranian prisons as part of the negotiation. The president took exception to the way the question was framed––and after scolding Garrett the way a teacher does a insubordinate student (“That’s nonsense. And you should know better…”)––he really didn’t provide an answer to the question in between all the long pauses. It was as if the president found the situation so rare, he began searching the room for Candy Crowley to jump in and save him from himself (again).

But not every situation is black and white, or absolutely right and dead wrong. Was the core of the question a legitimate one? Yes. $150 billion dollars and stifling economic sanctions being lifted alone should be enough to buy the freedom of four U.S. citizens being held without proof or anything resembling a fair due process. Included in the four is Washington Post Tehran Bureau Chief Jason Rezaian, so perhaps Garrett added some rare emotion to the equation for that reason. But Garrett’s explanation––that he was intentionally provocative to provoke a reaction from a president who oftentimes believes he’s the one getting paid by the word––makes the most sense. Remember, Garrett covered Mr. Obama for Fox back during the 2008 campaign and beyond when he took office. After seven years, he knows this president better than anyone routinely covering him. And in the end, he succeeded in striking a nerve while walking up to the line (but not going over) of what is and isn’t an appropriately-worded question to a sitting president. Think the kind of questions heard today were hard? Check out some old clips of Sam Donaldson sparring with President Ronald Reagan sometime…

But that doesn’t exonerate Garrett completely. In a way, he gave the president an out by allowing him to play the how-dare-you-say-I’m-doing-an-end-zone-dance-while-Americans-are-suffering-in-Iran-behind-bars card. And the theatre is now being analyzed over and over in the cable news world: not because Garrett wasn’t totally in the right for asking the question, but for how it was asked. And in the process, the conversation around how Team Obama completely dropped the ball by not getting those people out gets lost.

Meanwhile, four Americans are left behind when every opportunity was there to bring them home. Maybe the president and Secretary of State John Kerry are still arranging something after the fact. Maybe they’re being held for a few more weeks before being released to allow the Iranian negotiators to save face politically with the hard-line mullahs.

Either way, Major Garrett accomplished something those from the old-school have spent decades trying to avoid:

In chasing a story, he became the story.

All because he had the audacity to challenge the president directly, which is so rare… it somehow became a story.