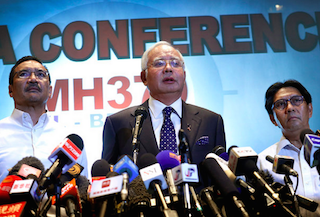 With the revelation from Malaysian Prime Minister Najib Razak that officials in that country “can say with a high degree of certainty” that Malaysia Airlines flight 370 was taken off course by “deliberate action” comes a new sense of hope for the families of the 239 people who were on board when it disappeared. The remote possibility that the plane could have landed safely has begun to emerge as a new media narrative on CNN, which has been the leader of speculation on this story, as well as on other outlets.

In his remarks, Prime Minister Razak did not say anything specific about the possibility that the plane is on land somewhere, only that his government has “conducted search operations over land” in addition to the South China Sea, the Straits of Malacca, the Andaman Sea and the Indian Ocean. But the Malaysian government did release the image below, showing two arcs in red that they say represent the possible last known locations for the flight before its satellite communication was cut. The northern arc goes through western China along extending to eastern Kyrgyzstan: 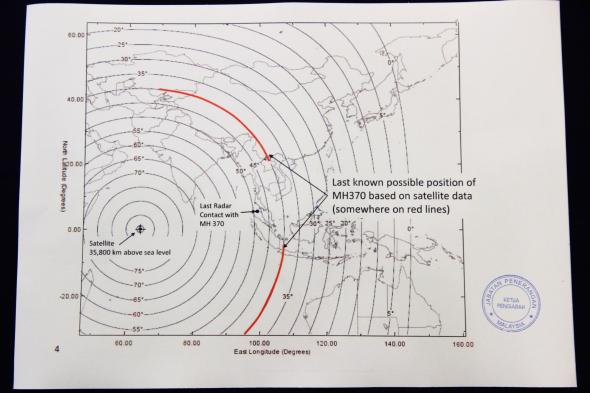 A subsequent tweet from BBC Myanmar/Burma correspondent Jonah Fisher is gaining a lot of attention for its suggestion that the plane is “most likely” on land somewhere near Chinese/Kyrgyz border:

Being briefed by Malaysia officials they believe most likely location for MH370 is on land somewhere near Chinese/Kyrgyz border.

Fisher followed up his tweet with disclaimers, warning that there is “still much uncertainty”:

Re previous tweet – still much uncertainty – could the plane possibly have flown across South Asian airspace undetected?and where now?

Further to earlier tweet on plane location. Officials were cross referencing ping data with how far MH370 could fly in 7hrs.

Similarly, CBS News is reporting that an unnamed U.S. official told them that investigators believe the incident may have been “an act of piracy” and that it was “possible the plane may have landed somewhere.”

Meanwhile, CNN has run with the idea that the plane could be on land, as evidenced by the report below from New Day Saturday. “This has been a week of immense anguish for them, correspondent Pauline Chiou said from Beijing of the relatives of those on board the plane. “But the latest developments that came out today actually give them a very small dose of optimism. That’s because there is no evidence that the plane has actually made impact on land or at sea.”

Chiou goes on to interview the father of one of the passengers who said, “I hope this is a hijacking, because they are of loved ones,” Mr. Li said. “I hope that they are alive no matter how small the chance is.”