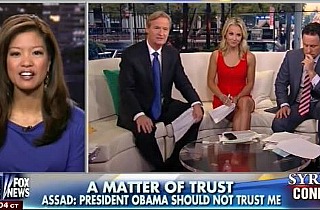 On Wednesday night, Fox News Channel broadcast an exclusive interview with Syrian President Bashar al-Assad. Reacting to that interview on Thursday morning’s Fox & Friends, conservative columnist Michelle Malkin wondered if President Barack Obama would take Assad’s “sound” advice to listen to the American public, a majority of whom do not want to intervene in that country’s civil war.

The hosts of Fox & Friends began by commenting on Assad’s polished performance during Wednesday night’s interview. Brian Kilmeade remarked that Assad came off like a “professor,” while Steve Doocy called him a “smooth operator.”

“He seemed like he knew what’s talking about, but you know he was lying to every question,” Doocy said.

“Calm, cool, and delusional,” Malkin agreed, quoting Richard Grenell. “I think it was instructive for the American people to see how stone cold-hearted and brutal this dictator is, and clearly how he’s playing not only Obama but the world.”

The hosts played a portion of the interview in which Assad advised Obama to “follow the common sense” of the American people and not attack Syria.

“Of course, it’s what a lot of us have advised this president to do,” Malkin agreed. “Listen to the American people.”

“Maybe it’s the one sound piece of advice that Obama will take,” she added.