Malkin To Kelly: IRS Not Just Scandal Because Of ‘Ideology,’ But Because Of Obama’s ‘Brass-Knuckled Intimidation’
VIDEO

Malkin To Kelly: IRS Not Just Scandal Because Of ‘Ideology,’ But Because Of Obama’s ‘Brass-Knuckled Intimidation’ 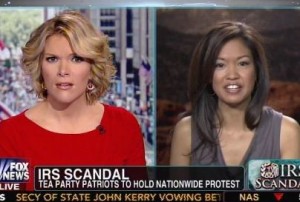 Michelle Malkin joined Megyn Kelly on Fox News Monday afternoon to discuss the latest developments in the investigation into the IRS targeting conservatives for audits. Malkin insisted it was not merely her “ideology” that has led to critique the Obama administration on their handling of the IRS issue and others, but rather the evidence she’s seen of their “bully brigade tactics” to “intimidate and criminalize their political opponents.”

Malkin began by going after White House Press Secretary Jay Carney for his handling of the various Obama “scandals,” saying the “clown Carney press briefings have turned in to a circus. We need Benny Hill music for all the backpedaling going on there.” On the IRS issue specifically, she added, “the idea that they had no idea about the bombshells that were about to explode is completely laughable.”

“Of course you don’t buy it,” Kelly said to Malkin, “because you’re a conservative and you don’t really like this particular president’s policies. But, the question is whether this is seeping out beyond party politics.”

This line of questioning led to Malkin’s assertion that it is not simply her political leanings that are causing her to criticize President Obama. After a break, she continued bashing the administration’s “brass-knuckled intimidation. whether it’s directed now against grassroots activists or small nonprofits or reporters and journalists like James Rosen,” referring to the Fox reporter who was tracked by the Justice Department. Malkin urged “everyone who has felt the boot of the Obama administration and its goons on their necks” to show solidarity by joining the Tea Party Patriots in their march against IRS offices tomorrow around the country.