Mall Of America Brawl: Arrests As Huge Fights Break Out On Day After Christmas 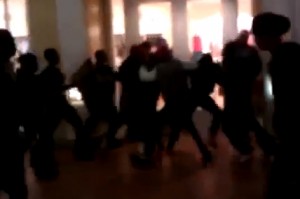 Almost a dozen people were arrested on Monday after a huge brawl broke out at the Mall of America in Bloomington, Minn., on one of the busiest shopping days of the year. Nobody was injured as drinks and chairs were flung around the food court and into the rest of the mall as the masses of people flowed throughout in a “moving brawl.”

Police told KARE that as one massive brawl broke out in the food court, other smaller fights were happening in other parts of the mall. Shoppers told the Star-Tribune that:

“The melee had elements of a ‘smash and grab’ flash mob, including heavy use of cellphones. They said those creating the disturbance numbered in the hundreds and some knocked down shoppers and grabbed items from kiosks and shoppers.”

The reason for the flash brawling? As crazy as it sounds, the best guess was related to social media rumors of recording artists Drake and Lil’ Wayne being in the mall. It produced this stellar statement from the Star-Tribune, which, keep in mind, applies to a shopping mall on the day after Christmas:

“Despite tweets and rumors to the contrary, no weapons were involved, no one was seriously hurt and no famous rap artists were on hand.”

YouTube user IcebergModSquad was among the first to post a video of the incident, which has become the grainy Zapruder Film equivalent of the brawl. It’s even more surprising that this shaky, blurry clip is one of only a few videos to surface of the incident so far, considering that, according to mall Taco Bell employee David Dunn-Schuda:

“It seemed like they were running a marathon, taking off and running people over. Then everyone was getting on top of tables trying to record it”

“This is highly unusual,” Commander Mark Stehlik of the Bloomington Police Department told KARE. “There’s never been any kind of an incident like this at the mall before.”

Watch a clip of the brawl and its aftermath below, courtesy of KARE-11 in Minnesota: