Man Behind Romney’s ’47 Percent’ Video Comes Forward: ‘I Had A Duty To Expose It’
video

Man Behind Romney’s ’47 Percent’ Video Comes Forward: ‘I Had A Duty To Expose It’ 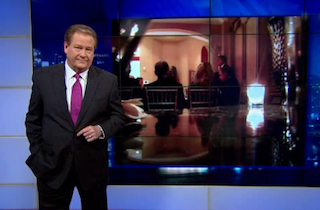 One of the most memorable moments of Mitt Romney‘s 2012 presidential campaign — and the one many have attributed to his eventual defeat — was the video from the private fundraiser in which he spoke about the “47 percent” of Americans. Several months later, the man behind the video (as he was bound to do sooner or later) is coming forward.

Last night, MSNBC host Ed Schultz announced that we’ll “meet the man who changed political history” on Wednesday night. “You will see his face. He will tell you his name.”

And as some suspected, the man behind the video was a bartender. “It was tough,” the man said in Schultz’s teaser. “And I debated for a little while but in the end, I really felt like it had to be put out. I felt I owed it to the people who couldn’t afford to be there themselves to hear what he [Romney] really thought.”

The Huffington Post also got in on the story, offering further reporting about the man (withholding his name until Schultz’s segment airs). He drew some inspiration from President Bill Clinton, after previously working at a fundraiser where Clinton spoke. His experience there, HuffPost details, was a good one: Clinton “came back to the kitchen and thanked the staff, the waiters, the bartenders, the busboys, and everyone else involved in putting the event together. He shook hands, took photos, signed autographs, and praised the meal…”

Heading into the Romney fundraiser, the bartender brought his camera in case he got the chance to take a photo with him. But Romney didn’t mingle:

Romney, of course, did not speak to any of the staff, bussers or waiters. He was late to the event, and rushed out. He told his dinner guests that the event was off the record, but never bothered to repeat the admonition to the people working there.

One of them had brought along a Canon camera. He set it on the bar and hit the record button.

It was his “civic duty” to expose the video, said the bartender who originally didn’t intend to release it. “I couldn’t sleep after I watched it.”

In the infamous remarks, you may recall, Romney said, in part:

Our message of low taxes doesn’t connect…so my job is is not to worry about those people. I’ll never convince them that they should take personal responsibility and care for their lives. What I have to do is convince the five to 10 percent in the center that are independents, that are thoughtful….

Ed Schultz’s teaser is below, via MSNBC: