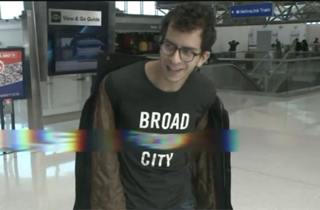 A man leaving SXSW suddenly found himself stranded in St. Louis after he was kicked off a Southwest flight when he refused to take off a shirt advertising the sitcom Broad City.

Daniel Podolsky told Fox2that he had boarded a flight from Dallas to Chicago wearing the shirt, which was handed out by Comedy Central at SXSW, while wearing a jacket. During the flight, he took the jacket off, and when the flight was redirected to St. Louis’s Lambert Airport due to bad weather in Chicago, decided to walk around the airport.

But upon coming back to the plane, Southwest employees noticed that his shirt said “Broad Fucking City,” and swiftly booted him off the plane. “There are more than a hundred people on the plane trying to get to Chicago and the most important thing is my shirt?” he asked. “How does that work? Where’s the sense of priority?”

While Podolsky told Fox2 that he would have gladly changed shirts if he’d been asked — “It all happened so fast. Within thirty seconds the flight was gone” — the video Podolsky shot of the confrontation says the exact opposite:

(Worker) ”Can you change the shirt?”

(Worker) “Can you put the jacket on and leave it on through the flight?”

(Worker) “Can you put the shirt on inside out?”

(Worker) “Is there anything you can do not to display the shirt because at this point we can’t allow you to go.”

(Podolsky) “I have freedom of speech.”

(Podolsky) “Really it’s not bothering anyone.”

Southwest stood by their employee’s actions, saying that they “rely on our Employees and Customers to use common sense and good judgment,”

Watch below via Fox2: