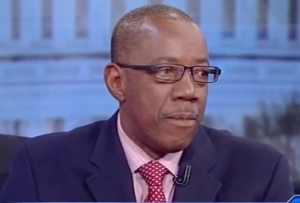 One of the biggest blunders of the Washington Navy Yard shooting media coverage was NBC and CBS erroneously reporting the shooter was a man named Rollie Chance. Both networks ended up retracting the report, but now the man misidentified as a mass murderer has finally broken his silence. He appeared on Fox News Thursday night to tell Greta Van Susteren he feels wronged, especially since no one at either network has called to apologize to him yet.

Van Susteren told Chance that CBS and NBC need to “pay for what they did to you,” since what they did was libel per se, but admitted a few times that this was the kind of mistake anyone could have made.

Chance said he found out about the report when someone in the media called him, and Chance also revealed that he was visited, and had his house searched, by the FBI. He explained, “My privacy was violated,” and told Van Susteren that “no one has called and apologized to me yet.”

Van Susteren elaborated on her Gretawire blog Friday morning, saying that while it’s easy for any network to make a mistake in the heat of the moment, they need to compensate Chance for damaging his reputation, and even offered to give his number to CBS and NBC’s lawyers so they can reach out to him. She also included a note to the rest of the media to put out more stories about Chance’s innocence, on order to outweigh all the falsehoods swirling around online.