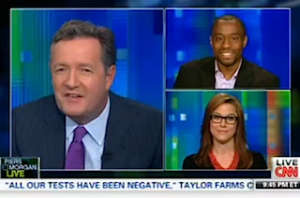 Tuesday night, Piers Morgan brought future Crossfire host S.E. Cupp and frequent O’Reilly Factor guest Marc Lamont Hill on his CNN show to discuss the growing controversy surrounding Oprah Winfrey’s story about experiencing racism in Switzerland. The two guests ended up in a heated battle over what it means for Winfrey to call someone “racist.”

Picking up where a Fox News panel left off earlier in the day, Morgan asked his guests if Winfrey was talking up the story of how she was once turned away by a Swiss shop clerk who thought she couldn’t afford a $38,000 bag in order to promote her new film The Butler. “I don’t think that’s how Oprah would operate,” Morgan said, “but what do you think of this particular incident?”

Whether it was intentional or not, Cupp said Oprah “went on national television and injected what she saw as racism into motivation for what happened in Switzerland.” She said it was “a pretty significant charge to levy and a little reckless on her part.”

The conversation proceeded to heat up between the two guests with Hill offering his surprise that Cupp would side with the “potentially racist” Swiss shop clerk. After much arguing back and forth, Morgan jumped in, saying, “I’m personally coming down with Oprah here. I’m on her side.”

On this, the two guests could agree. “Smart move,” Cupp said.