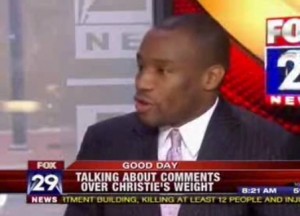 Marc Lamont Hill is still not done calling New Jersey Governor Chris Christie fat. If you didn’t hear, Hill got in a bit of hot water last week when, on MyFoxPhilly, he mused that Christie could never be president because “he’s fat.” And today he returned to the scene of the crime in an attempt to clarify his statements. But even as he tried to make amends, he couldn’t help taking a dig at the governor’s girth. “I’m sorry, Governor Christie, if I offended you. We can get together and have a salad. Talk about this.”

For the most part, Hill stuck to the explanations that he offered on The O’Reilly Factor last week. He reiterated that “voters don’t vote for people who are overweight,” which sounds reasonable, until you remember that voters did, in fact, vote for Christie in the first place.

Hill also put single people in the fat camp, claiming that the electorate wouldn’t vote a bachelor or bachelorette into the White House. But he quickly went back to harping about Christie’s weight, saying that “someone that large, someone that takes up two slots at the debate dais is not going win.” He used Mike Huckabee‘s weight loss as evidence that Chrisite would have to lose “50 or 75” pounds to become a real contender in 2012.

Comments like this, he says, have earned him a week’s worth of hatemail and general ire from political conservatives, which he attempts to comabt by saying basically, “Don’t blame me, blame the voters.” Try and catch the fast-talking Hill’s various explanations and slights in the clip below.